Coming from Brisbane, this one man band is the brain product of Joel Glazebrook. Using an elaborate setup of synths, drum machines, guitars, and loop pedals both in the studio and for live performances, Edith Thomas Furey create catchy new wave post punk with an 80’s feel, with some heavier kind of elements taken straight from the 90’s industrial scene. Since august he has released three singles, with mention of an EP due in the future. 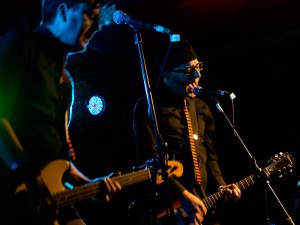 Undead Apes are the all star team of punk rock bands from Brisbane in the early 2000’s. They feature Simon Graydon from Sekiden, John Mercer from Greig, and Dick Nasty, Adam Scott from Eat Laser Scumbag!, and Renae Elise from Gazoonga Attack. Their live shows are a complete rarity with their bassist Adam living overseas, but they have still found time to write and record three albums over their lifespan, which have all been released on Brisbane label mere noise records. Their latest album ‘Landfill’ was released on the 14th of June 2016 and features lyrical themes such as astrophysics, recreational use of embalming fluid, tofu, communist brainwashing of youth via rock’n’roll, and affairs of the heart. This set was captured at their only live show of 2016.