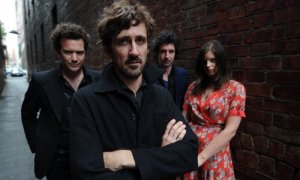 Starting all the way back in 1997 in Perth, Western Australia, The Drones have been crafting iconic Australian rock songs for almost 20 years. They have released 6 studio albums, 4 live albums, 2 EP’s, as well as 2 Live DVDs. They’ve received nominations for almost every accolade possible in the Australian music scene as well as having their single “Shark Fin Blues” considered the best Australian Song by a number of prolific Australian contemporary songwriters.

As you can probably guess from their name, BATPISS produce a rigid and unyielding cataclysm of dirge rock; spanning doom, sludge, punk, drone and spiritual styles. They’ve released one cassette, and two full length albums as well as touring Australia, New Zealand, and Indonesia in their short 4-year career. Their 2015 Album Biomass captures a band willing to explore the parameters of heaviness, emotion, story-telling, and power within their 3 sided pain-cage.